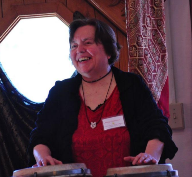 It is with deep sadness we share that Laney Goodman passed away peacefully on the morning of Wednesday, January 4, 2023 after an extended illness. She was with her beloved partner of 32 years, Kay Stoner.

Laney was a lifelong cultural creative, committed to finding light in the world and bringing it forth in new ways. She was a tireless advocate for women’s culture, especially women’s music. As an on-air host at WXPN in Philadelphia and later at WUMB in Boston, she introduced her listeners to many female musicians they might never have heard of, and she formed a special bond with her listeners. She played an important role in the creation of several radio stations while living in Northern California. And as host of the nationally syndicated radio show, Women in Music with Laney Goodman (aired weekly from 1996-2023), she brought female musicians from around the world to the airwaves, giving voice to many who would otherwise have not gotten airtime.

Later in life, Laney turned her attention to live events, leading two choir tours to sacred sites in England, including performing at Glastonbury Abbey and the Goddess Conference. She was also a beloved community drum and song circle leader, bringing people together with her open heart and her community Mother Drum. Her events reached across New England, and beyond. She also was a singer and songwriter and an accomplished drummer. Her powerful voice, like none other, was both strong and sweet and able to move us from our heads into our hearts. Her chants are loved and sung by many.

Laney’s passing leaves a great void in many connected circles worldwide. Her open heart and spirit were a source of so much hope and inspiration. In the space of an evening, she literally changed lives. Her ready laugh and sometimes uncomfortable honesty will be missed.

Laney is survived by her partner and spouse, Kay Stoner of Bolton, Massachusetts; her brother and sister-in-law, Clay and Connie Goodman of Valdosta, Georgia; her sister and brother-in-law, Chris and Fred Chang of Alpharetta, Georgia; and many beloved nieces and nephews. Memorial services will take place with family and friends over the coming months. Announcements will be made as those plans are finalized.